Mark A. Schneider is 34 years old and is Father of 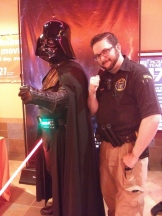 one daughter. Mark has been training for the past 16 years in gun safety, novice gunsmithing, shooting and tactics. He has over 7 years of security experience mostly in Armed uniformed security. He has a licensed security company and is a licensed armed security guard with the City & County of Denver. He is a NRA certified pistol instructor, a NRA refuse to be a victim instructor and a NRA chief range safety officer with over two years experience. His past work includes working as a contracted Protective Security Officer for the United States Federal Government and high risk contracts in high crime areas.

Some of His Current and Past Work includes:

Mark was a loss Prevention Officer for the Marriott Denver Tech Center Hotel. He was in charge of guest, employee and building security. Most notably, he worked security at the hotel during the Democratic National convention. He worked closely with Local, State & Federal Law Enforcement. He helped secure the hotel while many VIP’s visited the hotel.

Mark Supervised his uniformed armed security staff at one of the worlds largest restaurants, Casa Bonita. The restaurant is known for its South Park episode, its historic value and being is business since 1974. The restaurant would have as many as 1300 people on site at one time while having the capability to seat up to 900 people. He was in charge of his security staff to provide safety for guests and employees. He would respond to many calls including fights, suspicious persons, medical situations, employee escorts, disturbances, accidents and more. He was also in charge of providing security for the Cash room which would sometimes secure large quantities of money. Most notably, he provided security for celebrities during the Book Of Mormon annual party.

Mark worked as an Armed Uniform Patrol Officer in charge of patrolling and responding to calls for apartment and condo’s throughout Denver, Colorado. Some these apartments included section 8 housing, all the way to luxury apartments downtown. Some of the calls he responded to were domestic violence, noise violations, car break ins, disturbances, theft, suspicious persons, vandalism and more.

Mark provided Uniformed security for a high risk liquor store during this time. He and the owner helped stabilize the security situation and to provide a safe environment for the owner, customers, building and his inventory. Through team work of himself and the owner, a level of security was achieved that was not gained before.

Mark worked as a Security Officer for both Denver Water & Union Station/Crawford Hotel. His time at Denver Water was to protect Metro Denver’s water utility that supplies water to Denver and the Surrounding cities. He worked any from the main campus providing physical security to working access control and as a patrol officer at their water treatment plants. Mark also worked security at Denver’s Union Station as physical security and CCTV. He worked very closely with RTD Police & RTD Security Officers.

Protective Security Officer – Federal Protective Service, Department Of Homeland Security – May 2017 to May 2018

Mark worked as a Contracted Armed Uniformed Security Officer under the Department of Homeland Security. His job included protecting Federal Buildings, Federal Employees, Judges, Politicians, Visitors and more. He worked access control, screening, patrol, physical security, bailiff, CCTV, Anti-terrorism and more. He was required to uphold standards that are the highest in the security industry. He was required to maintain a security clearance.

Mark now works for himself as an owner and operator. To this point he has worked many accounts including high crime motels, work place violence prevention, events, club security, movie theaters, restaurants, burglary prevention, events, banks, dispensaries and more.

Mark has received the majority of his training from Former Special Forces, Army, Navy, Former Police, Marines & More. Mark always considers himself a student of the trade, trying to learn more each day.